A cookie is information stored on your computer by a website you visit. Cookies often store your settings for a website, such as your preferred language or location. This allows the site to present you with information customized to fit your needs. As per the GDPR law, companies need to get your explicit approval to collect your data. Some of these cookies are ‘strictly necessary’ to provide the basic functions of the website and can not be turned off, while others if present, have the option of being turned off. Learn more about our Privacy and Cookie policies. These can be managed also from our cookie policy page.

IE10 and below are not supported.

Existing Site: The Plaza West study area is situated at the southwest corner of the intersection of Seth Child Road and Anderson Avenue. With strong connectivity to regional trails and primary arterial corridors, this site has the potential to transform into a prominent commercial destination– with restaurants, hospitality, mixed-use retail, and some multi-family housing interspersed with green spaces and parks. Initial market analysis indicates that not only would these types of development patterns perform well within this area of the City, but they would also be complementary to other commercial activity within this area. This development approach would further address the need for retail goods and services for residents living on the west side of Manhattan. 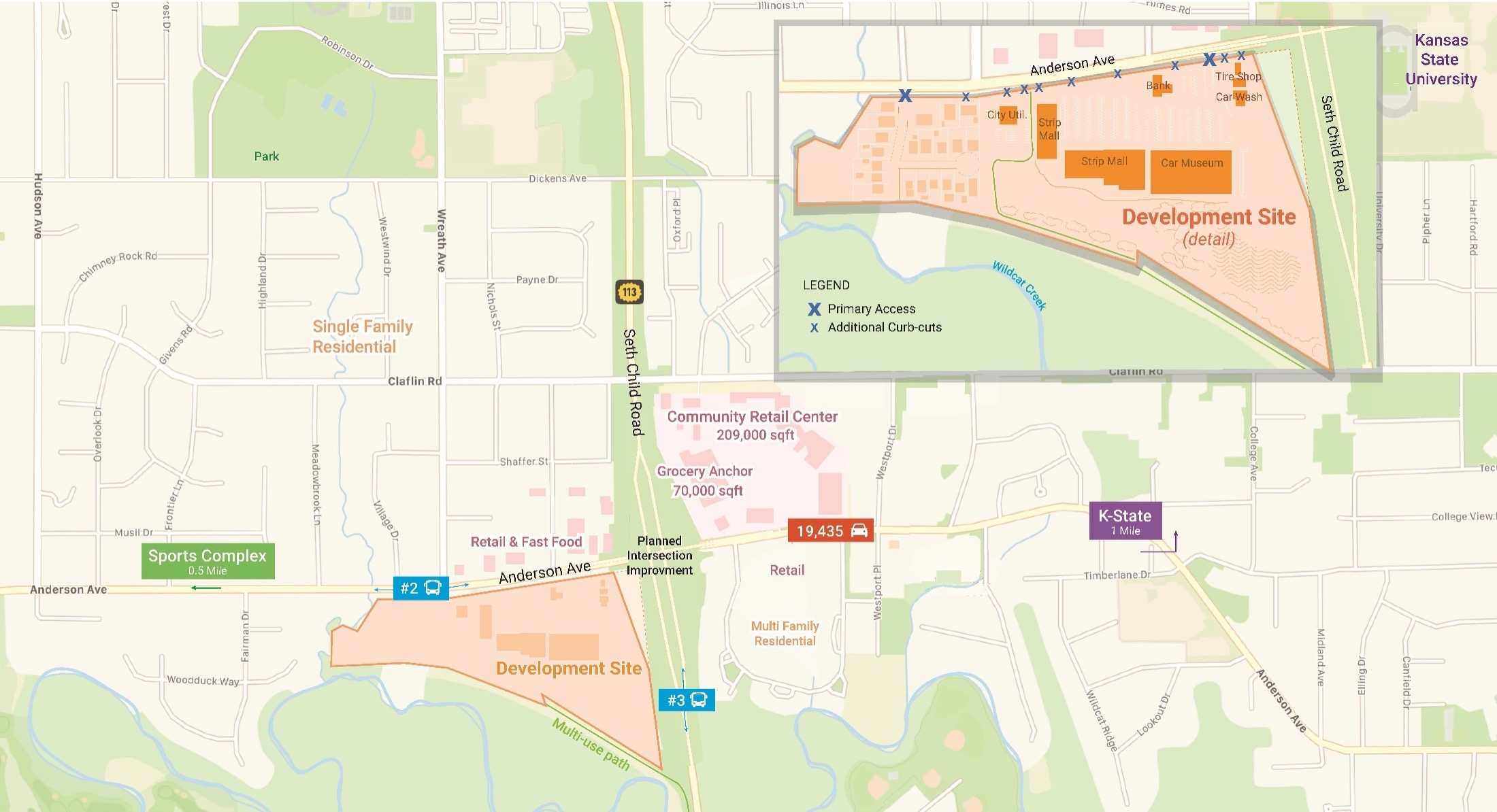 Community Engagement: To help communicate this study, and solicit feedback from property owners, residents, and the public, an open house was hosted at the site on May 27, 2021. This outdoor event included several stations where participants could learn about the study, share their thoughts, and participate in site tours that explored the opportunities for development. Based on participation from this first event, initial feedback indicated that residents would support a transformational use of this area that was a destination for family activities, a place to gather with friends at restaurants and retail establishments, and was better connected to surrounding neighborhoods.

One of the stations at this first open house event asked residents to share what they love about Plaza West, what they want more of at Plaza West, and what they’d like to see less of at Plaza West. Many participants indicated they love the businesses that are already located at this site and its convenience for those living in the western neighborhoods of Manhattan. As this site is reimagined, residents would like to see more protection from flooding, more green space and opportunities for family entertainment, and more mixed-use buildings. The site features residents would like to see less of are fewer curb cuts and access points onto Anderson Avenue and less concrete.

Flooding: It's important to acknowledge the previous flooding events that have occurred at Plaza West and how the presence of the 1% (100-year) floodplain will impact development patterns on this site. While a significant area of the southern portion of the site is impacted by the 1% (100-year) floodplain, including three existing buildings, a large swath of land is also situated outside of this 1% (100-year) floodplain and is prominently adjacent to the Anderson Avenue corridor. To better address and protect this site from future flooding events, it will be important to concentrate development activity close to Anderson Avenue, decrease the amount of concrete on the site to better absorb stormwater, and construct new buildings that can better withstand the impacts of flooding or are elevated to reduce the likelihood of damages from flooding. 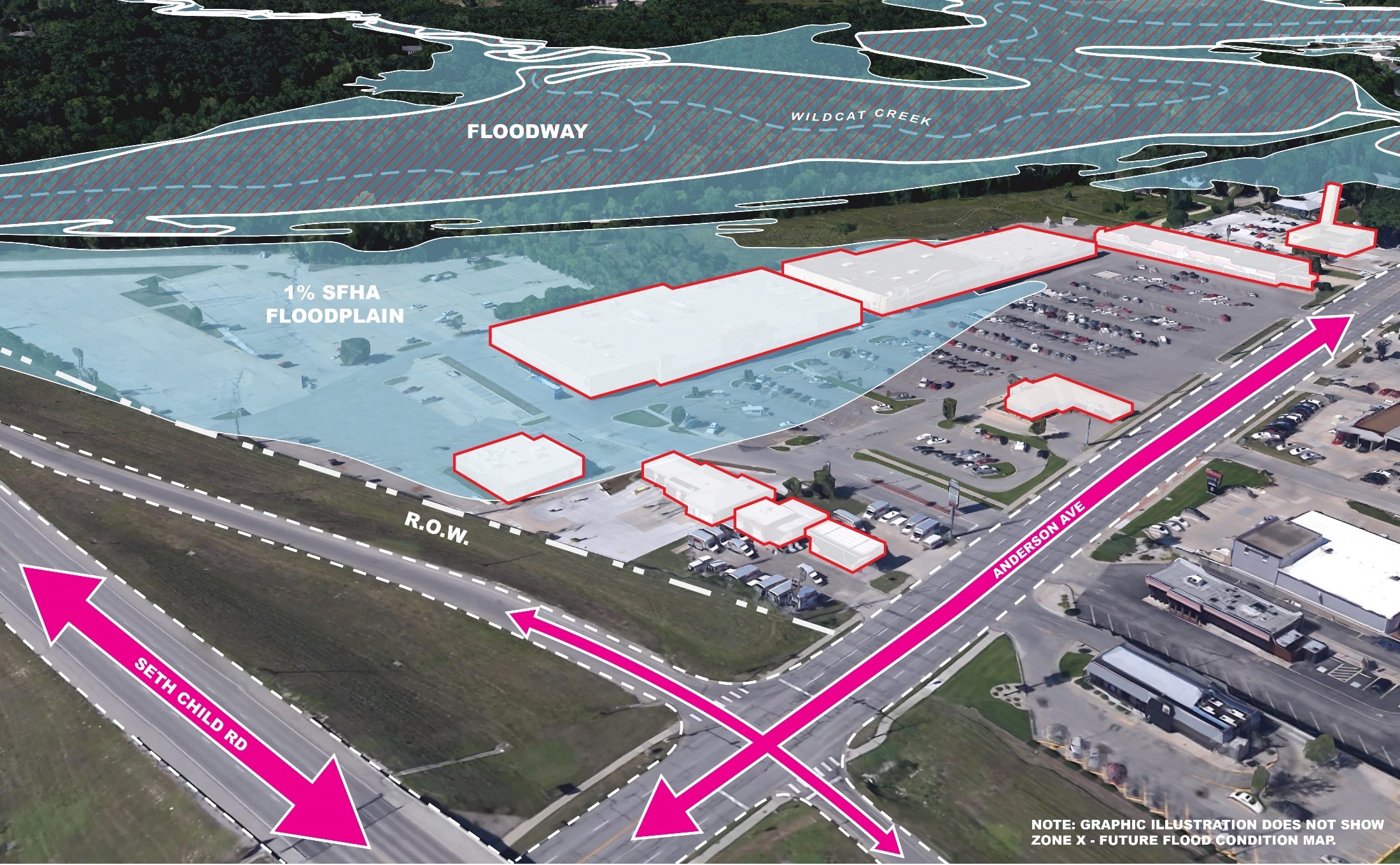 In addition to a broader site analysis of flooding impacts, the planning team analyzed flood impacts of hypothetical development scenarios. The basic scenarios were incorporated into two different computer models commonly used to study and map flooding with the intent of showing if adding fill to the site to an elevation that protects existing or new buildings from flooding would negatively impact adjacent properties along Wildcat Creek. The following series of images depict the 3 different hypothetical development scenarios: partial earthwork fill (with less than half the site filled in), intermediate earthwork fill (with more than half the site filled in), and a full earthwork fill of the site. In all scenarios, the amount of fill would raise the ground so that it would be one foot above the 1% annual chance (100-year) flood elevation. For the partial earthwork scenario, this would equal 1 foot of fill at the northern portion of the site to approximately 6 feet at the southern end. The intermediate earthwork scenario represents 1 to 7 feet of fill to more than half of the site. The full earthwork scenario added 1 to 8 feet of fill to the entire site.

The FEMA 1D HEC-RAS model is the model used to develop FEMA’s standard flood map. This computer model was used to determine how the different hypothetical scenarios would impact the height or elevation of the floodwaters for a 1% annual chance (100-year) flood event and the boundaries of the floodwaters. This model is a good representation of how the three scenarios may increase the depth of the floodwater or cause the flooded area to be larger.

The other computer model used to study what impacts filling the site would have on the area is the 2D HEC-RAS flood model that Manhattan has recently developed for the Wildcat Creek Watershed. The 2D flood model shows the depth, velocities, and area of the floodwater, but also allows the consultant team to see how water flows and would inundate an area. This model is useful to visually represent how the flooding occurs and can also be used to see if the velocities of the floodwaters are increased, which can lead to being a more dangerous flood or cause erosion.

Both computer models indicate that the Linear Trail and Seth Child Road embankments keep much of the flooding from Wildcat Creek outside of the Plaza West site. The exception would be extreme flood events, like the one that occurred in 2018, which was larger than a 1% annual chance flood (100-year) event. None of the 3 fill scenarios showed a negative impact on flooding, either within the project area or adjacent to the project area. This is generally because raised Linear Trail separates the creek from the site, preventing any water that falls on the site to enter Wildcat Creek during a flood. This, in turn, means that the site does not impact the flood situation, except for extreme floods that would overtop the raised trail.

Designing for Resiliency: While the site can be organized in a way to avoid areas of flooding, new construction can also be designed in a way to be more resilient to flooding events. The following examples are case studies (from Stantec projects) where resiliency concerns have been addressed. 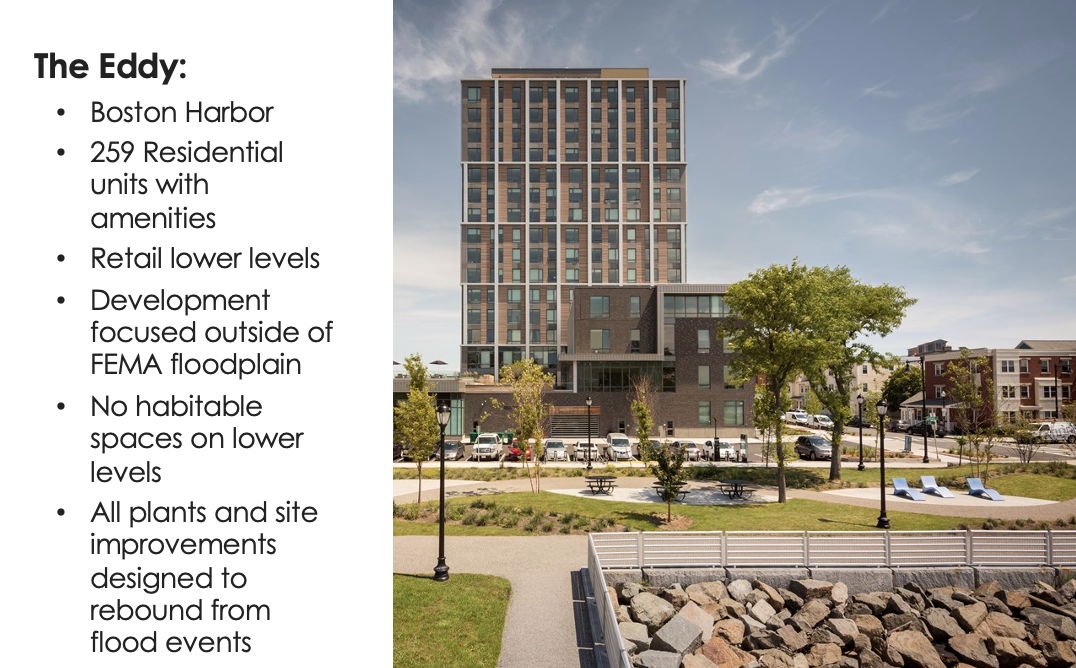 Located in the Boston Harbor, the Eddy is a mixed-use residential development comprised of 259 residential units with amenities and retail development on the lower floors. The development of permanent structures is focused outside of the FEMA floodplain, with no habitable spaces located on any lower levels. This scenario accommodates practical use of the space during dry events but also allows for the quick evacuation of supplies and equipment during flood events. Thinking beyond the buildings themselves, all plans and site improvements were also designed to quickly rebound from flooding and were considered for their long-term durability. 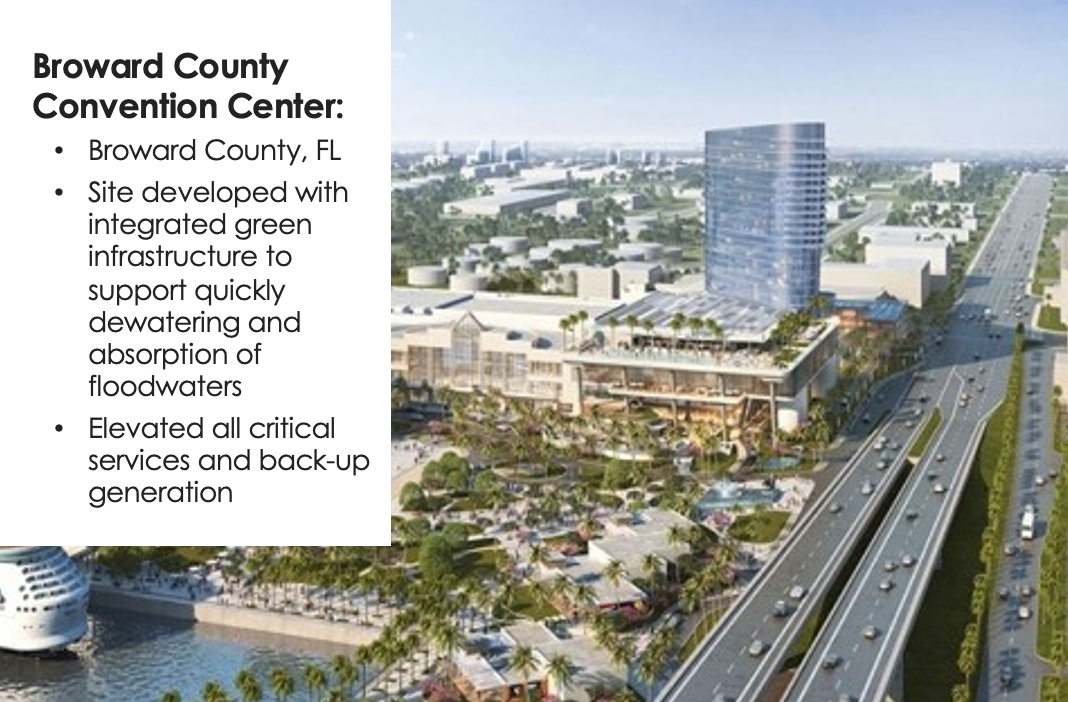 The Broward County Convention Center is a large-scale public use space located near the central Florida coast. The site was developed with integrated green infrastructure to support quick dewatering and absorption of floodwaters. Furthermore, all critical services (such as primary gathering spaces and building mechanical and backup generation systems) were located on elevated stories of the building where they would be out of direct impact from any flooding event. 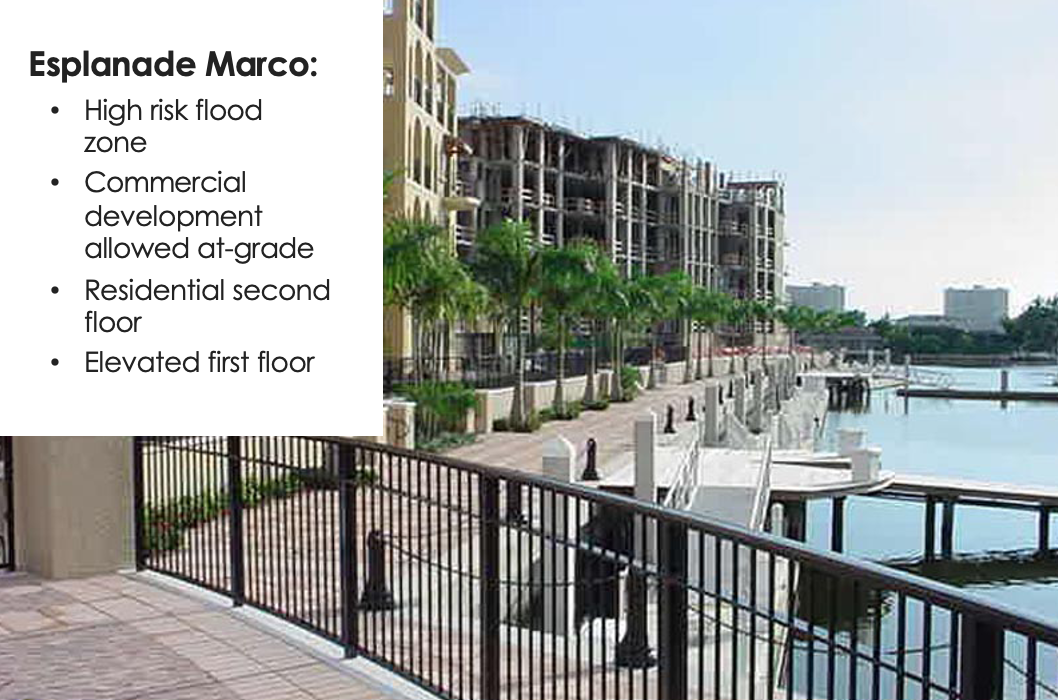 Also located along the Florida coast, the Esplanade Marco is another example of a mixed-use development located within a high-risk flood zone. While commercial spaces were allowed at grade on an elevated first floor, all residential units were located on the second floor and higher to help protect from natural flooding events. 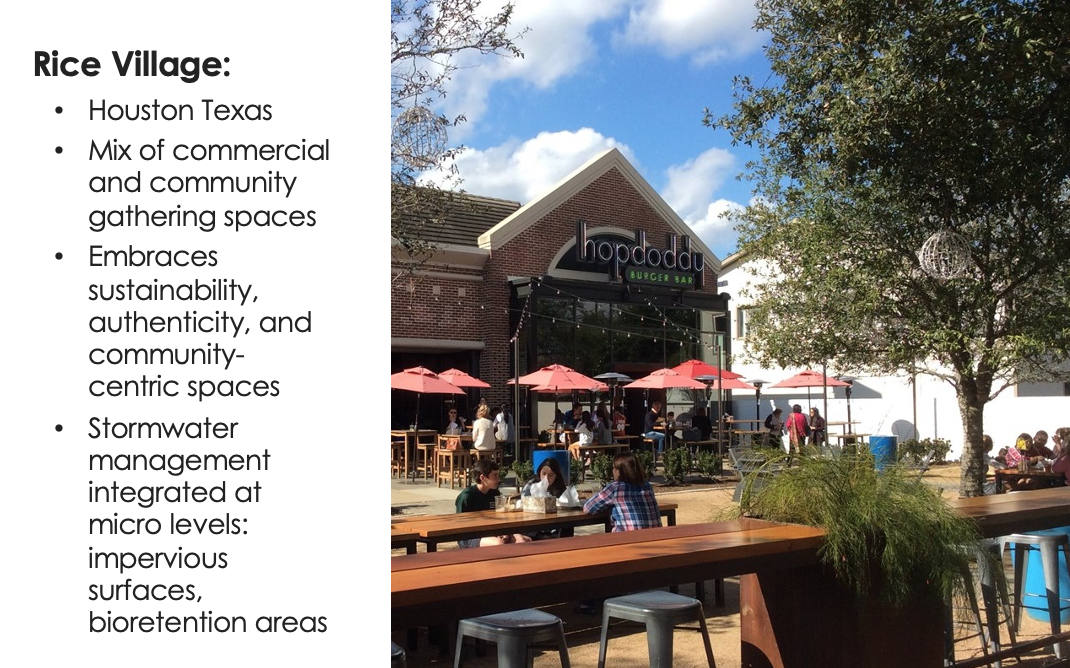 Located in Houston, Texas, Rice Village is an example of a mixed-use development that places heavy emphasis on community gathering spaces that are environmentally sustainable and authentic to the character of the community. Throughout this development, stormwater management was integrated at micro levels to include elements such as impervious surfaces and bioretention areas that can quickly absorb stormwater and minimize the imminent impacts of flooding events.

Developable Area: There are many ways to address the flooding impacts at this site and it’s important to note that, even beyond the area within the floodplain, there are more than 11 acres of developable land outside of the floodplain that can support reinvestment and revitalization. 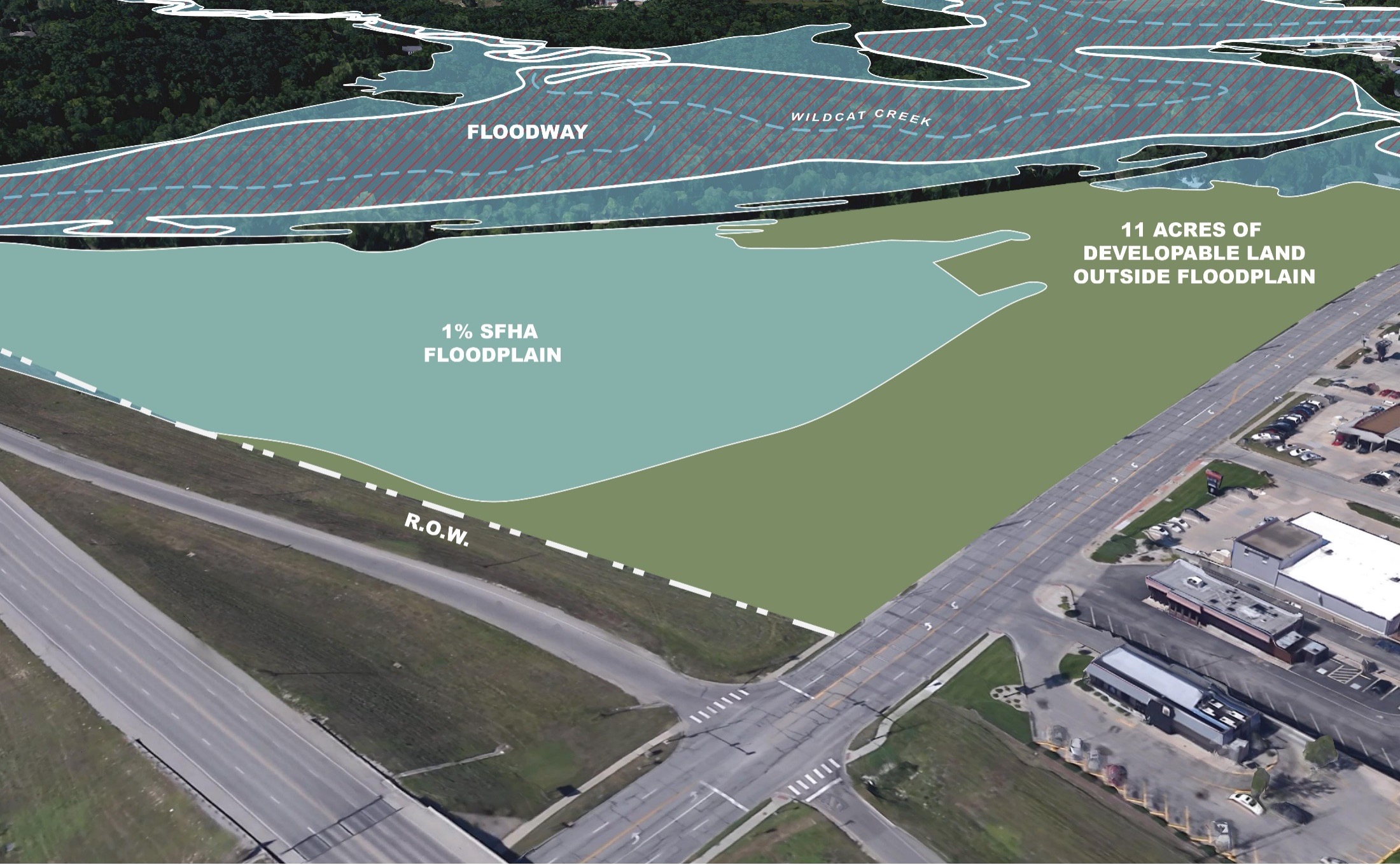 In fact, the Plaza West area has been studied previously and has generated significant interest from developers, designers, and students, alike. In 2019, the Landscape Architecture program at Kansas State assembled several different development scenarios for a project branded as “Higher Ground”. These design studies envisioned four different options for how the Plaza West could be redeveloped in a way that is resilient to flooding and supports increased use of this site. These studies serve as a great opportunity to evaluate drastic changes to this area and each scenario takes a different approach to branding and programming the area. While they each have their own merits, it’s important for current efforts to root development recommendations in the current market context. 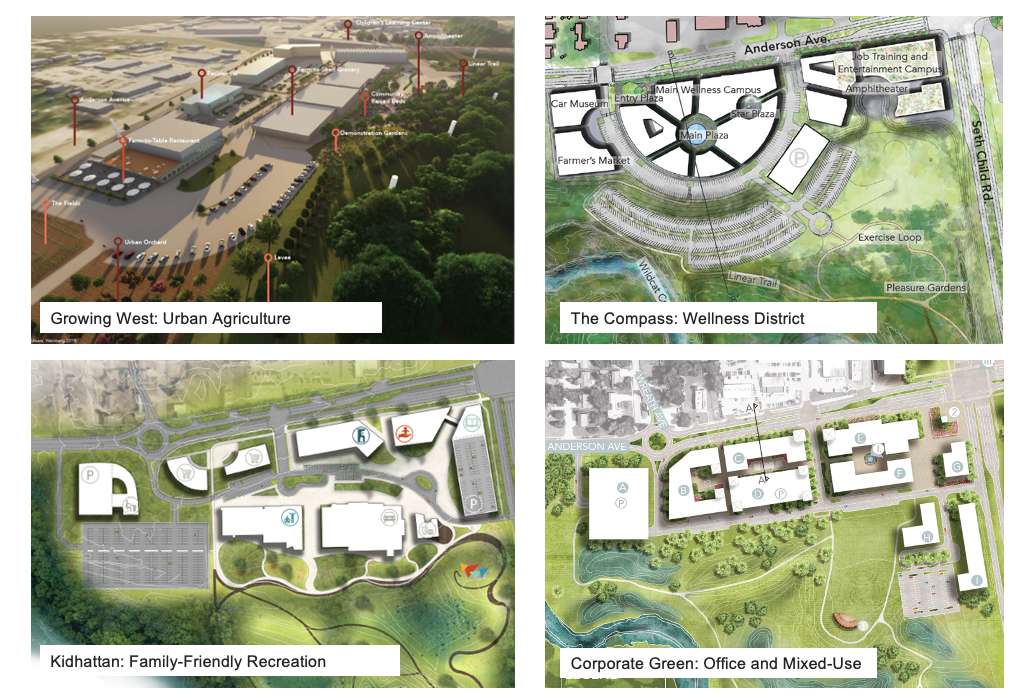 Market Analysis: Early on in this planning effort, Stantec completed a market analysis to identify the key market opportunities that could support the redevelopment of the Plaza West area. Key findings concluded that the west side of Manhattan is currently underserved for primary commercial needs and this area could support a mixed-use of moderate retail, restaurants, and entertainment areas which could also be supported by multi-family residential units and hotel/hospitality developments. 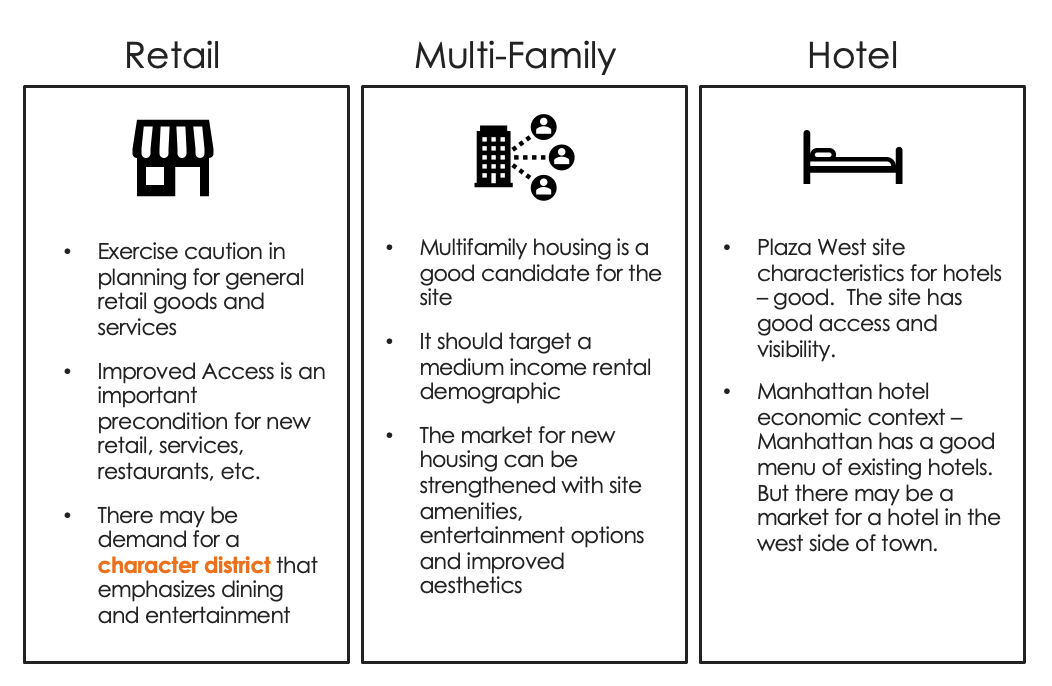 Based on this information, feedback from the community, and the existing conditions analysis completed by the planning team, a schematic design concept has been assembled that begins to lay out a general framework and organization for the site. Key aspects include new construction located as close as possible to the Anderson Avenue corridor– with a mix of multi-family housing, commercial and hospitality uses. Two of the existing buildings on the site would remain and all concrete areas at the southern portions of the site would be redesigned into green space that would both support community use and activities, as well as help alleviate flooding. All new construction on the site would be designed in a way that is resilient to flooding– with upper levels designated only for housing. 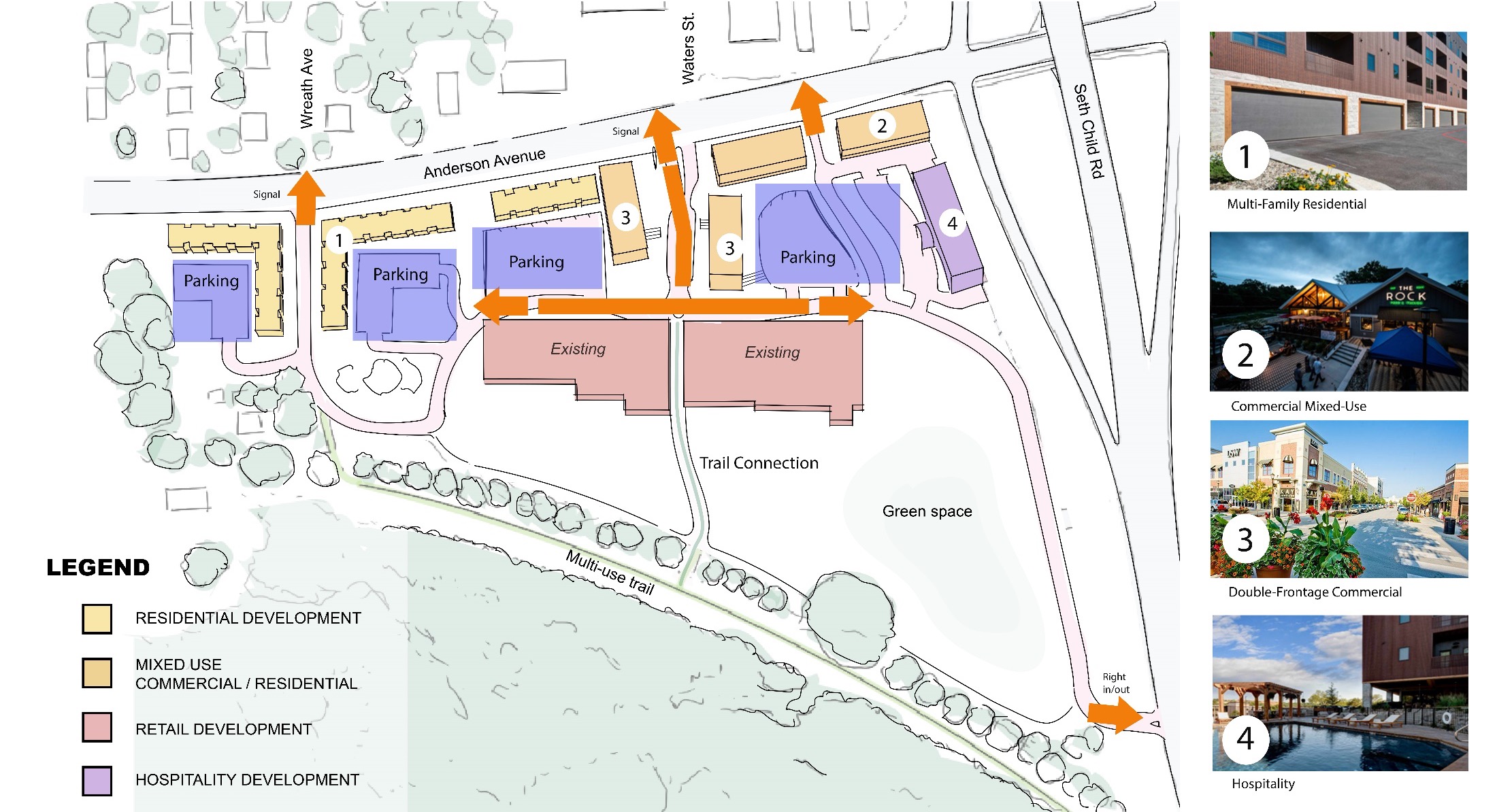 As this next diagram illustrates, this mixed-use approach would elevate the visibility of development at Plaza West as well as concentrate on new construction outside of the floodplain. 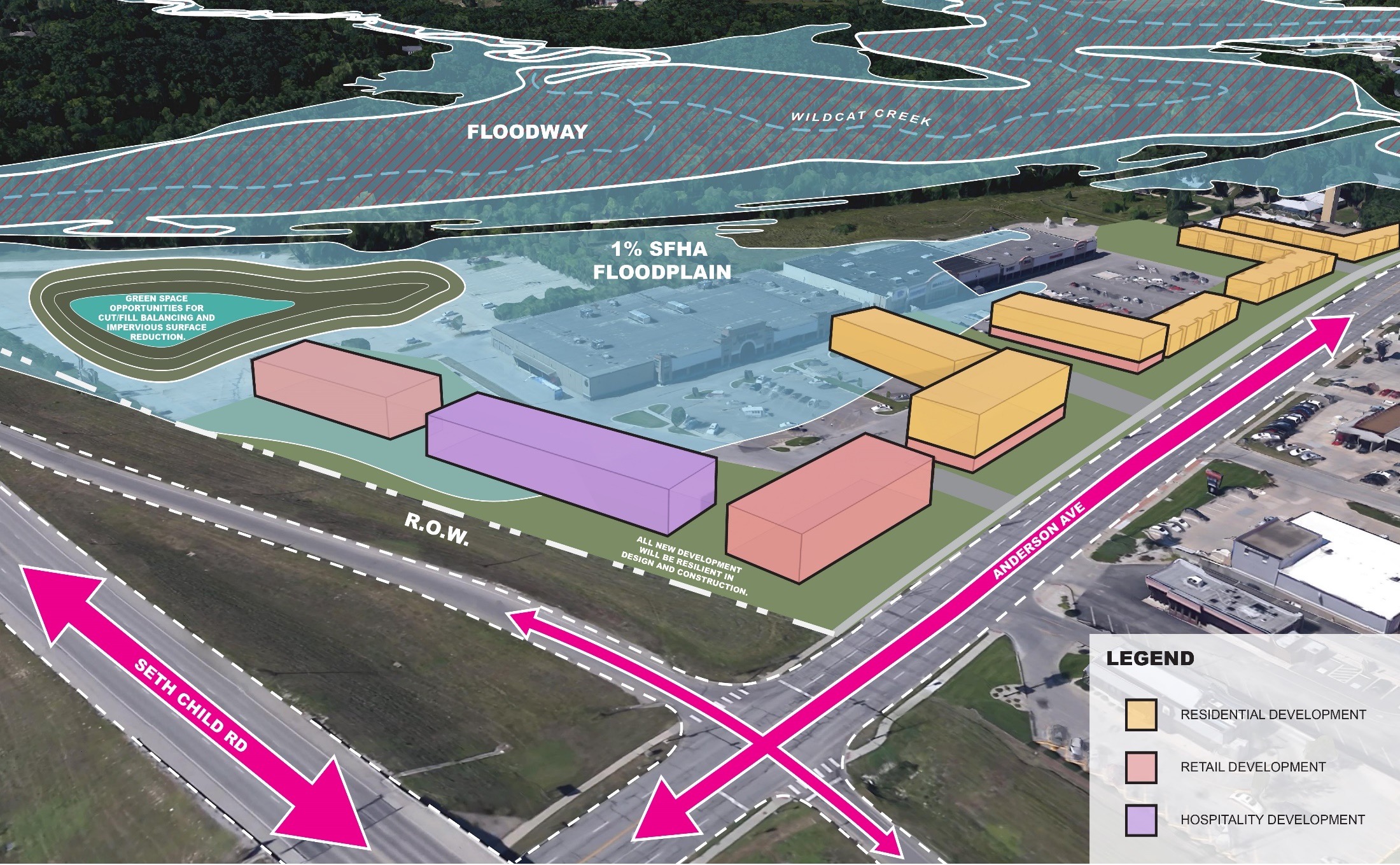 Finally, as green space areas are planned and designed throughout the site, it will be important to consider natural systems and the role these areas play to help alleviate flooding. All of these examples portray real-world examples of how green space has supported resiliency efforts in similar developments, all across the world. 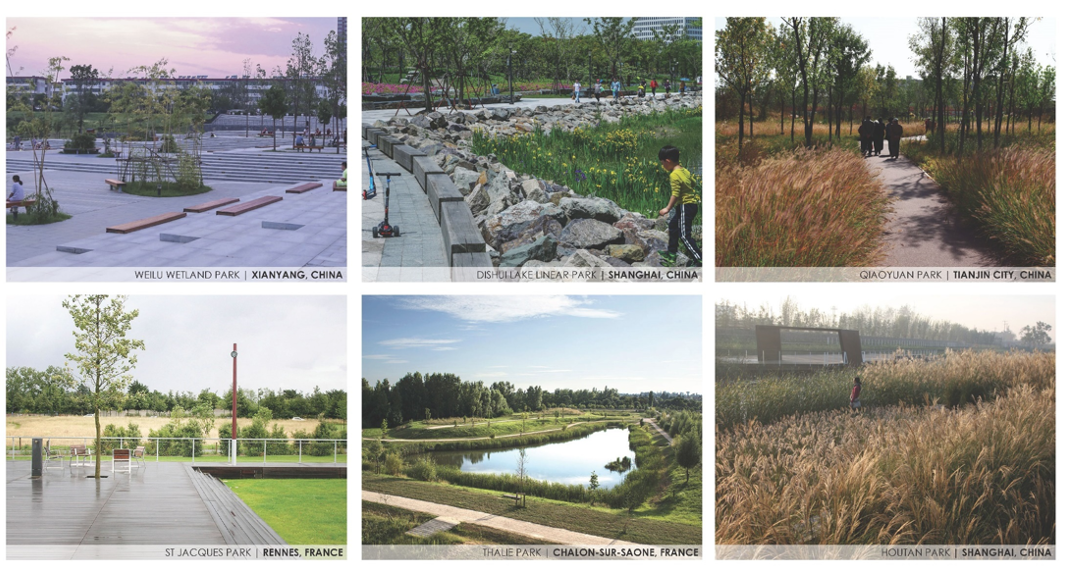